​     Last week we began a sermon series inspired by J.R. Briggs’ book called “The Sacred Overlap: Learning to Live Faithfully in the Space Between”.  We started with the example of what our life is like as Christians.  We inhabit this earth temporarily, but our forever home is in heaven with God.   We are an Inhabitant and a Foreigner - each is distinct.  But don’t we belong to both?  That place where the two circles overlap, called a mandorla by mathematicians, represents what the two have in common.  The term that fits for us is resident aliens.  Christians are residents on earth, but our citizenship is in heaven.
Another example of when a sacred overlap can happen is when a Christian is living a God-honoring life, but has people in their life who mock, dismiss, or even attack their faith.  It could be an obnoxious neighbor, opinionated in-laws, or a supervisor at work.  As Christians we’re called to live in the world, but not be of it.  In today’s Scripture, Paul tells the church in Rome to fix their attention on God and they’ll be changed from the inside out.  He also warns them not to become well-adjusted to their culture because they might find themselves fitting in and never realize it.
I want to share an example of how a Christian could be themselves and have a genuine connection with someone who scoffs at anyone who is “religious”.  Imagine you have a co-worker who tells anyone who’ll listen that there’s no such thing as God - you just have to get through life the best you can.   But one week they’re quieter than usual.  As you wait in line to use the office copier, you see her there trying to finish up, but she has tears in her eyes.  When she notices you there, she confides that she’s really been struggling because her father is dying of cancer.  You’re shocked she’s confided in you, but you listen and care.  A few weeks later you’re stunned to learn that your parent has been diagnosed with a life-threatening condition.  You go right to your co-worker and share your news.   She listens, and cares.  The common ground, or mandorla, is your love and worry over a very sick parent.  What remains distinct or separate is your faith in God and her disbelief.  As time goes on, this remains an underlying tension you both navigate, but you continue to care and be open with one another.
I’ve shared this made-up story with you because it seems to me that our world - our culture, our politics, our churches, so much - has become painfully polarized.  Haven’t you felt pressured to say you are for or against something?  Have you been asked to choose someone or something, and let that be made public?   There is tremendous anxiety that comes with picking sides, with declaring what you believe in or reject.   What is rarely discussed, but well overdue, is for people to speak up and say that there is maddening complexity in the issues that matter to us.
I think there is another, far more faithful way for us.  Jesus shows us how we can stand on the very real edges of what matters for people.  We can see their borders.  They may be thick and fixed.  There’s one closed circle next to another closed circle.  Each is deeply invested in their belief.
What Jesus modeled for us was the ability to stand on the edge of each, to move in and out, to cross the borders.  He listened carefully. He saw the whole of each person, not just the image they tried to project.  Jesus was in the mess of it, where things could get tense and intense at the same time.
But it’s in the overlapped place, where two people, or two sides, move closer to one another, that there are possibilities.   A suspicion can be proved wrong.   An accusation can turn out to be mere gossip.   When there’s enough courage and resilience to stay put when you feel uncomfortable with someone who doesn’t believe what you believe, that is so very good.  It’s in that place of overlap, where you’re leaning in to better see and understand someone – and they are doing the same - that puts you both on common ground.  Sharing space is the beginning point.   All manner of good things can follow because you’re in a place we call a sacred overlap.   God does amazing things when people see each other’s humanity. Debate can become discovery.  Assumptions can be calmly examined.  When strong emotions lessen, the brain thinks more rationally.
Jesus embodied sacred overlap.  He moved toward people.  If someone pressured him to be for or against something, he’d bring fresh air into their stale arguments.  Jesus also told stories that shone a light on all sorts of injustices.  He knew that once eyes were opened there was no going back.  And through all that Jesus said and did, he helped stretch people so they could better see the vision God has for our world.
With Jesus’ example before us, here’s today’s new image: it’s a circle identified as Normal and another labeled Weird.   In the overlapped place of great potential is the word Peculiar. Last week we heard this word used in our Scripture from I Peter 2:9: “You are a chosen generation, a royal priesthood, a holy nation, a peculiar people.”

​       Twice in the Old Testament and twice in the New Testament God’s people are called “peculiar”.  But nowadays can’t that word imply someone who is eccentric or a bit of an oddball?  What Christian wants that kind of a reputation?  Let me clear up the confusion with a quick history lesson.  In 1611, thanks to the invention of printing, the King James Version of the Bible was produced; it would become available to common folks, not just religious leaders and authorities.  Since the word peculiar was commonly used in speech, it was included in the newly-printed Bible.  But back then it didn’t mean someone was odd, it meant they were unique.  It was a positive phrase, an affirmation.
In an article written by Rev. Billy Graham, he said the word “peculiar” is best translated as “distinctive”.  He said: “We who’ve given our lives to Jesus completely will have a distinctive lifestyle.”  I like the sound of that!
The words peculiar and distinctive remind me of what was said about the early Christians.  Historians say they were “strikingly different” from the pagan culture around them.  “Pagans were known for being stingy with their money, but promiscuous with their bodies.  Christians gave practically nobody their body, but everybody in need was given money.” (p. 78)
That brings us to today’s final sacred overlap, which ties everything we’ve been learning about together.  A church in California called “ReImagine” used the image of a yellow circle to represent time Christians spend growing spiritually.  The blue circle represents time being other-centered, serving others. Notice that the mandorla is green space.  That represents the smaller, but very potent times when Christians’ internal faith and their outward service are blended.  These are times when Jesus-saturated people are doing something meaningful with people who aren’t yet on an expedition with Jesus.  It means meeting people where they already are in life, or in the neighborhood where they live - then embracing whatever it is that will bring them more hope, help or meaning.  That is green space living. 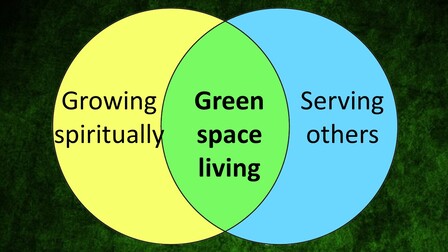 ​     I want to say something very sobering, but true.  No church today can afford to remain yellow or blue.  While an inward focus is comfortable, and outward-focused time serving others feels good, we desperately need to integrate the two.  Living in the green space, being Jesus-saturated men and women who meet people where they are and daring to have faith conversations as we serve them – that’s where and when God’s Spirit is at work and the Kingdom of God grows and grows and grows.
I promised last week I’d share three ways anyone can start a faith-centered conversation.  I heard about these from a Christian writer, Erwin McManus, and I think they are spot-on.   He says God has placed in every heart three significant longings.  First, we all long for community; we want to know others and be known by them.  God wired us to be relational.  If we live in isolation, we’ll feel lonely; but having good companionship makes us all happier and healthier.
If you want to have a faith-centered conversation with someone, ask them who’s important in their life.  You may want to share as well, but then talk about how we’re all made for community.  Relationships can help us grow, and thrive; God made us that way.   From there you could talk about the wonderful difference it’s made having a church family.   It’s an entry point, one interesting thing for them to ponder that relates to God.
The second thing people wonder about is their destiny.  What will happen after they die?  Is this all there is - or could there be an afterlife?  These serious questions about what’s in their future matters.  Many people feel they have a soul, and it doesn’t make sense to them that they’d stop existing.  People search for answers for years and find nothing that satisfies.  As Christians we have answers to their questions.  Tell them about Jesus’ life, death, and resurrection - tell them the assurance you have about heaven and eternal life.  This is a topic of interest for more people than you can imagine.
The third thing people universally want relates to significance.  What is my purpose in life, they wonder; why get up every day, go to work, come home, eat, sleep, and repeat?   Is that all there is?  It can feel pointless.  Every day people feel like their lives have no meaning: what difference does it make whether they are dead or alive?  Tell them that’s not true.  Share how you wake up in the morning and know you are created by God; you aren’t perfect, but you are loved.  Explain how you came to realize what you’re good at. Tell them it’s O.K. to try and fail -- God will help us, always.  Most of all, help them realize their lives have tremendous, beautiful potential.  You’ll help them see how bright and good tomorrow’s horizon can be.  Thanks be to God.