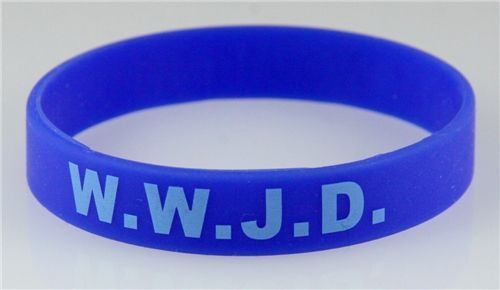 A woman named Naomi had a six-year-old grandson, Joshua; he loved attending that year’s Vacation Bible school. The theme of the week was, “What would Jesus do?” All the kids got brightly colored bracelets to take home on the last day - each had WWJD on them.
A few evenings later Joshua’s mother asked him to change out of his clothes into his pajamas. Joshua stayed where he was on the couch, and seemed to study his WWJD bracelet.  His mom saw this and spoke up saying “I think Jesus would do what his mother asked him to do.” Joshua slowly lifted up his face and said “I don’t know, mom. In every picture I’ve ever seen of Jesus he seems to be wearing the same clothes all the time. And I am trying really hard to be more like Jesus.”
Well, spot on! That boy is right! There’s a lot about Jesus we don’t really know for sure. And if anyone will notice or question things, it will be children.
Here’s another great story about a child and what he thinks Jesus would do.  Every Saturday evening Jeremy’s mom cleaned out the leftovers from the refrigerator.  One night she gave the remaining portion of tortellini to six-year-old Jeremy - but her eight-year-old son Matthew also wanted some of the tortellini, so they got to bickering.
Their dad Ken stepped in, hoping to remind them of what they should do as Christians.  He sat down at the table with the boys and said “Jeremy, what would Jesus do in this situation?”  Jeremy, thinking about the feeding of the 5000 from a recent Sunday School lesson said, “Oh dad, he would just make more!” True enough, little Jeremy was probably right.
Many Christian scholars, untold numbers of theologians, preachers and everyday saints have themselves tried to speculate about what Christ would do in any given situation.  After studying Jesus’ teachings in depth one scholar offered the best answer I have heard to date.  When we wonder “What would Jesus do?” The answer can be summed up in two words: “something unexpected.”
Today’s passage from Philippians invites us to focus on the WWJD question.  The apostle Paul writes, “if you have any encouragement from being united with Christ, if any comfort from his love, if any common sharing in the spirit, if any tenderness and compassion, then make my joy complete by being like-minded, having the same love, being one in spirit and of one mind.”
“Do nothing out of selfish ambition or vain conceit.  Rather, in humility value others above yourselves, not looking to your own interests but each of you to the interests of others.  In your relationships with one another have the same mindset as Christ Jesus.”  In other words, think and act like Jesus.
Paul says that understanding Christ’s humility is our starting point and embodying it is our call.  The best illustration of humility I have ever heard comes from a man by the name of Ullrich Zwingli. He was promoting unity during the Protestant Reformation, but it wasn’t always easy. One man he was at odds with, now nicknamed the Father of the Reformation, was Martin Luther. Zwingli didn’t know what to do about their tense relationship, so he went for a walk one day up a Swiss mountain. He glanced ahead on the trail and chanced to see two goats on a narrow path coming from opposite directions – one going up the mountain, the other going down. When they met each other and saw that neither one could pass by on the side, they both backed up. Zwingli feared they would lunge at each other on the narrow path and one or both would fall to their death. But then a wonderful thing happened. The goat going up the mountain lay down on the path. The other one stepped carefully over his back. The first animal then got back up and continued his climb to the top.