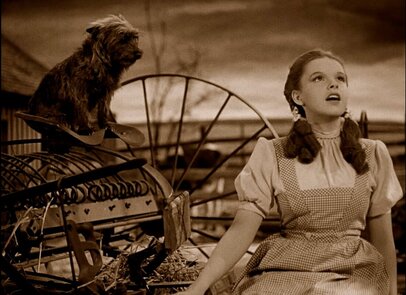 Dorothy was looking for her little black dog named Toto, as a terrible tornado approached.  She was caught up in it and arrived in the Land of Oz, where there were enchanting talking creatures.  Looking around, knowing this was not normal, Dorothy said, “We’re not in Kansas anymore!”
It was disorienting for Dorothy to leave behind her home, Aunt Em and Uncle Henry.  Her surroundings were unfamiliar; she had no idea what to expect next.  As the story unfolds, we discover that Dorothy is a delightful, level-headed, and assertive heroine.  This story, “The Wonderful Wizard of Oz”, was a children’s book written by L. Frank Baum, published in 1900.
Can you imagine what life was like back then?  Have you read about that time period in history? People worked hard and helped their neighbors.  They might not have owned a book, but they’d feel blessed if they had a cow to milk.  Most people never traveled far from home, and not much news from the wider world reached their ears.
Contrast this with our life today, in 2022.  Everything has advanced exponentially.  Much of it benefits us, but not all.  There are some unexpected and painful consequences of our modernization.  These days none of us stay within a 5-mile radius of our homes like most people did in 1900; we have all manner of transportation options. We can travel halfway around the world in a matter of hours, not months.  We’ve also made remarkable progress in communications; our phones and internet services help us know what’s unfolding on our street, or anyplace else in the world, as it happens.
I think our excellent communication networks and our ability to travel abroad have brought us to a place most of us never imagined.  We’re interconnected, using online sources and travel to expose ourselves to different people, cultures, governments, social issues, justice concerns and more.  We’re probably the last generation who can claim that we’ve lived in a homogenous community. Today diversity is our new normal.
While differences can be enriching, we also know that differences can divide us.  This morning I want to talk about the grievous increase in polarization.  It isn’t just an American problem - it’s a global one.  Some of the hot-button issues today revolve around abortion, gun control, political affiliation, natural resources, racism, COVID, illegal immigrants, and so on.  Hasn’t it been painful watching people we know and care about take sides, sometimes becoming entrenched, or even radicalized over these issues?
We’re no longer confined to a 5-mile radius over our lifetime, so we must find ways to live in this modern world, with people who are polar opposites, as faithful Christians.  But how can we do that when there’s toxic rhetoric and endless violence?   How do we start healing divisions? By the grace of God, I hope to offer you some godly advice on having a voice and influence in the world around you.

FIND OUT THE FACTS   Before we form an opinion on any topic, we need accurate information.  Do your homework and find trustworthy, unbiased sources.   Anyone can post or publish a truth claim, so we need a healthy dose of skepticism.  Verify things for yourself because this is an age of misinformation.
And remember to turn to your Bible: there are clear instructions and valuable insights. Scriptural wisdom should guide us no matter what the subject may be.  In today’s Bible lesson, Paul spoke the Word of God to the Jewish leaders - that was his source - but the Jewish leaders stubbornly rejected it. This was a polarized situation.

DISAGREE BUT STAY IN RELATIONSHIP is the next principle.  The Jewish leaders disagreed with Paul and didn’t want any relationship with him.  Have you ever disagreed with someone, perhaps over the topics I mentioned earlier, but maintained a close relationship with them?  What can make this possible is being in a trusting, bonded relationship with them.  You accept others as they are and will walk alongside them. You see everyone as children of God and persons of worth.  You respectfully acknowledge others’ choices and convictions.

What can destroy the closest of relationships is an EITHER/OR APPROACH.   The apostle Paul preached the Gospel to Jews and to Gentiles.  He included both, whereas the Jewish leaders insisted that only the Jews could receive salvation. I’ve noticed that people or groups that use an either/or approach on a topic usually find it hard to remain in a relationship.  Let me offer some examples:
You may believe your view on abortion is current and compassionate.  If someone doesn’t agree with you, you might assume that the other person has a point of view that’s out of touch and harmful. Notice how this is framed in terms of complete opposites.
Here’s another example of an either/or formula.  If you feel your view on climate change is accurate and backed by science, someone who has a different view might be thought incorrect and naïve.  Can you see the unfair one-up/one-down dynamic at play here?
A final example: your view on undocumented workers is informed and unbiased; if others don’t have the identical belief, it insinuates that they are uninformed and biased.
Can you see how dangerous this sort of dichotomy is?  It makes it “us and them” and if taken further it can imply that one is the hero/wise one versus a villain/village idiot.  Listen carefully as I explain how you can avoid being pulled into a harmful either/or approach.  When someone states their opinion and then asks for yours, you can share your opinion… and if you’re like 90 percent of people, it’s more of a middle-of-the-road perspective.  Very rarely do two people hold polar-opposite viewpoints, not if they sit down and talk specifics.  So, when someone says, “are you for or against?” a certain hot topic, don’t shrug or tell them you’d rather not talk about it.  As Christians we should make valuable contributions on today’s important issues.  Explain where you stand and why, respectfully.
If there’s any interest after you talk with someone about your point of view, you may have a longer conversation.  But before you delve in, take some time to explain to the other person what you see as BASIC GROUND RULES for a healthy conversation.
If you can use these principles, you’ll remain in relationship after your dialogue ends.

Sadly, though, today’s Scripture passage ended with the Jewish leaders stirring up godly women and civic leaders in the city, so that an angry mob chased Paul and Barnabas out of town! The majority religious group ended up driving out the minority, as we still see happening all around the world.
But Paul and Barnabas shook the sand off from their sandals and left with joy in their hearts.  That too, is a good example for us to follow, should the occasion call for it!  Amen.