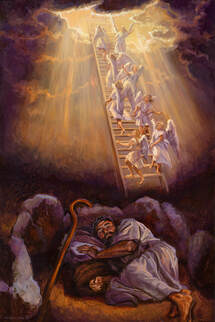 ​     Jacob set out on a 450-mile journey; the only thing he took with him was a branch of a tree, made into a walking stick.  This is the first time a walking stick shows up in the Bible, but it soon becomes something God’s sojourning servants, leaders and prophets use for travel, but also for performing miracles.
This is my fourth message on “Reforesting our Faith:  What Trees Teach Us about the Nature of God and His Love for Us”.  In today’s Scripture we see Jacob running away from his family, his older twin brother Esau is tracking him and hoping to kill him.  Jacob had terribly wronged him once before, giving his very hungry brother a bowl of his delicious stew, but demanding Esau give him the elder son’s double portion of inheritance.  That was a high price, but Esau had been out hunting for a long time and was ravenous, so he agreed to it.
Then came another swindle, this one done secretly and with their mother Rebecca’s involvement.  As their father Isaac lay dying, he asked that his oldest son Esau prepare him a meal; he would eat and enjoy it, then give his blessing to him as the next patriarch God would use to generate many descendants and possess the Promised Land.  Rebecca, knowing her husband was almost blind, put animal skins on Jacob’s arms, dressed him in his brother’s clothes and then prepared a special meal she knew he’d savor.  When Jacob brought in the meal, his father ate and was satisfied, then he felt the hair on his arms and smelled to make sure it was the scent of his oldest.  Isaac then uttered his deathbed benediction, giving Jacob the honor of being God’s chosen one, fulfilling the covenant that began with his Father Abraham.  Remember Abraham, who entertained 2 angels and the Son of God in the shade under the oaks in Mamre?  As prophesied by Jesus himself, ninety-nine-year-old Sarah conceived and had a son Isaac, whose name meant “laughter”.  The lasting lesson from that day was this: “Is anything too hard for the Lord?”
Now back to big brother Esau.  He soon found out about the devious trick played on his feeble father and he immediately began to scheme how to kill Jacob.  Rebecca got word of his intention and quickly sent Jacob off, telling him to stay with her brother.  Two days in, Jacob is on the run heading into exile, and the Bible says he’s feeling afraid as the sun sets.  This is the first inkling we get that the man has a conscience, that he grasps how serious the consequences are for his actions.  He had manipulated his own father and wronged his twin brother, all out of a sense of greed.
This man was ambitious and a master manipulator - his life was headed in the wrong direction.  He’d brought terrible pain and shame to his family and hardship down on himself.  He was isolated, exhausted, and perhaps starting to feel remorse.  He’d had plenty of alone time to realize the consequences of his actions.  Have you ever been going in the wrong direction in life?  Do you know what it feels like to have a strained relationship with your family?  Or have you ever gotten into problems of your own making, and not known what to do?  If you have found yourself “in over your head”, with past mistakes you cannot keep running from, stay tuned for what happens next with Jacob!
He was camped out in a rocky region that was also thickly forested.  We know that because he mentions the city of Luz, which in Hebrew means “almond”.  Historians from that era recorded how most of Israel was forested at that time, not at all like the desert-like conditions of today. Jacob was bedded down near fields of almond trees, and as we’ve seen before, God is often at work wherever we see trees!
Maybe almonds were even his evening meal, God’s provision of nutrition that night.  When he fell asleep, he had a dream and saw a set of stairs - some use the translation “ladder” - and it went from heaven to earth.  Do you realize there is never any way at all for us to build a stairway up to God?  It’s impossible.  God alone must provide that access for us.
Jacob saw many angels on the numerous steps, each busily making their way down or back up on their divine assignment of ministering, protecting, or providing for God’s people.  That amazing sight showed Jacob something many people don’t often consider.  God is at work through his legions of angels blessing and caring for those who are his, whether we can see that happening or not.  When I was a young adult, I loved Amy Grant’s song called “Angels”.  Here’s some of the lyrics:

Do you believe that is true?  The song goes on to say:
​
God only knows the times my life was threatened just today
A reckless car ran out of gas before it ran my way
Near misses all around me, accidents unknown
Though I never see with human eyes the hands that lead me home
But I know they’re all around me, all day and through the night
If you ask me what’s protecting me, then you’re gonna hear me say:
Got his angels watching over me, every step I take
Angels watching over me, every move I make.
The Lord God spoke to Jacob in his dream, as he had to his father and grandfather, making 5 amazing promises: I will give you many descendants, a promised land, my holy blessing, and I promise you will return to your native land.  Finally, I promise my presence will be with you always.
That all sounds amazing, doesn’t it?  But why is it that a man who schemed and was greedy was given all of these magnificent promises by God?  How does a scoundrel like that, a ruthless man with broken morals, get to receive all of these blessings?  What we’re about to see is that God often chooses to use imperfect people, failures even, for his divine plans.  If you stop and think about that, you may realize that is very good news for us, isn’t it?  God keeps on pursuing us, even though we’ve messed up and want to run and hide.  We might rebel or reject God for a season, but He never gives up, never abandons us.  God’s love is wide and deep, forever seeking, always ready to rescue us.
Do you realize how much God loves you this morning?  You might have been a rebel or a runaway, or you could’ve been obedient from the start.  God loves us all just as He finds us.  We aren’t better than Jacob, nor worse, because we have this in common: we are all sinners.  We fall short of God’s standards.  “But God” (that phrase is one of my favorites found in the Bible)… “But God, while we were still sinners, sent us his son Jesus Christ who died for our sins.”  That is called grace; it’s unearned favor, it’s what makes us right in God’s sight! (Romans 3:23).  That is worth celebrating, always, the sweet assurance that we are included in God’s kingdom on earth, and we’ll be welcomed to his heavenly kingdom as well.
Jacob’s dream makes me wonder whether or not anyone here has ever had a dream, or a message from God. There are many ways in which God shows us His will, or purpose.  If you do hear a message, if you feel led to speak or act on God’s behalf, trust that God will help you. He’s likely counting on you to be his messenger for a need in today’s world.  Listen, trust, and obey!
I do want to draw our attention to the wooden ladder, or stairs, in Jacob’s dream.  They connect earth with heaven; at the top stands God.  That means Jacob got to see God face-to-face, as well as many angels, His radiant messengers coming and going on their missions.  It’s also revealed that there is a single path, one clear way to the Father in heaven.  Jacob got to witness the beautiful path that leads toward life with God... but notice it is a narrow path, not a vast highway or many different roads.  That is a consistent message told throughout the pages of the entire Bible. There is a Messiah, one who will be sent to bridge the gap - our mediator is Jesus Christ.  He himself declared: “I am the way, the truth and the life, there is no other way to the Father except through me.”
Now, here’s an interesting side note.  Does anyone know that Jesus referenced Jacob and his dream in the Gospel of John, chapter one?  Read it and you’ll see that Philip, his newest disciple, was bringing his friend Nathaniel to meet him.  While still a distance away Nathaniel skeptically asked Philip how the Messiah could come from Nazareth; everyone knew it was a lowly place, with a poor reputation. No holy one could possibly emerge from that origin.  Nathaniel said people there were “dolos,” which means deceitful or crafty.
The two men walked onward, eventually reaching Jesus.  As they approached, Jesus spoke directly to Nathaniel, saying, “Now here is a “man of no deceit, no craftiness, no dolos”.  That knowledge of his private conversation with Philip stunned him; how could Jesus know and playfully use the very word he’d just used to insult his hometown?
Jesus also said he saw Nathaniel praying under a fig tree, when he had thought he was entirely alone.  Knowing that only God could know such things, he declared: “Surely, You are the Son of God and the King of Israel”.  Jesus’ response was equally powerful; he said, “I  assure you; you will see heaven open and the angels of God ascending and descending – and I myself will be there” (John 1:51).  Jesus was referencing Jacob, known for his “dolor”, his deceit.  He was promising Nathaniel eternal life - isn’t that amazing?
Here are this week’s life application lessons - consider what God wants you to know and trust today and in the coming week:     And, perhaps best of all, God can use any one of us to do his special work in our world!  We can be called, equipped, sent, and used.  So, keep a walking stick handy - you never know what mission God will send you on!  I wouldn’t be surprised if it involved a tree, or even a whole forest!  Thanks be to God, amen.