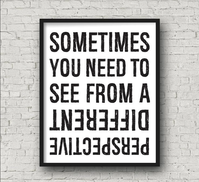 This is a good week to think about stereotypes, because there are plenty of them found in parables like the one we heard today.   A stereotype is a widely-held, set idea about someone or something (based on their actions or behaviors); stereotypes are often oversimplified.  They can be positive and accurate, or untrue and unfair.  Let’s see if you can identify some stereotypes from the 1950’s in America.  I’ll name a task or role and you tell me whether a male or female would have typically done that: