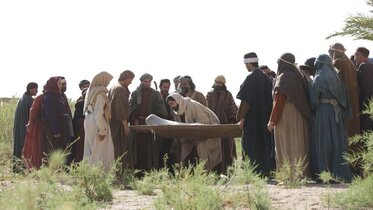 Compassion, God’s compassion shown to everyone, is a theme that weaves throughout the gospel of Luke.  In today’s passage we learn that Jesus has left his seaside home base in Capernaum and has travelled 20 dusty miles south.  A large crowd has followed him and his 12 chosen disciples; they’d been listening to his intriguing teachings and were awed when he stopped to heal every person who came before him.  He wasn’t like any other healer or rabbi they’d ever seen or heard before.  He looked with love as each bent, broken, hobbling person approached him; he directly touched their vulnerable bodies, showing them compassion, and that was a gift in itself.  But then, once severe scars became smooth skin and the crippled began walking and jumping, Jesus and all who were nearby thoroughly enjoyed watching their celebration of new health.
The crowd following Jesus on that long-ago day was growing curious; they realized they weren’t headed toward a large city, but to a tiny, and seemingly insignificant, village called Nain.  As they got closer there appeared a smaller crowd in the distance, but it was a somber one.  Jesus drew near but he didn’t pass by them – instead, he calmly made his way to the front and stood before the grieving mother.  Her son, who’d died that very day, was being carried on an open pallet to the cemetery.
Can you imagine this real-life encounter?  A well-known hometown boy taken too soon, and his grief-stricken mother numbly shuffling toward an open grave?  Take a wider view and there’s a large procession marked by death and sorrow encountering a huge crowd filled with great hope and joy.  Such opposites.  The same is true as you look at who’s at the front of each group; there’s a young person defeated by death in one, but leading the other is Jesus, our Savior, come to defeat death.  Can you see the contrast and clash of darkness and light, sorrow versus triumph?   Then comes a pivotal moment; the Bible says that Jesus “saw” the struggling widow and he “had compassion” on her.  As he drew near, it was obvious that no husband was by her side, revealing that she was a widow.  She’d most likely already taken this same path to bury him.  Now she’d live with relatives, dependent on them for her welfare.  It would protect her from hardship, but it might also feel like a limiting and lonely future.
Jesus sensed this woman’s pain and hopelessness as he came and stood before her.  Not wasting any time, he looked into her eyes and said, “Do not cry.”   He wasn’t being heartless here; he was letting her know that her reason for crying was about to end. He was going to restore her son’s life!  Without delay, Jesus turned and laid his hands on the corpse saying,“Young man, I say to you, get up!”  And immediately, the boy who was his mother’s pride and joy, opened his eyes, blinked up at the sky, then sat up, bewildered.  His mother must have wrapped him in her arms, sobbing and rejoicing.
The close-knit community from Nain witnessed this miracle; they watched the amazing reunion of mother and son, then began to shout: “God has come to us, to help His people.” That exultant message was true then, just as it still is today.   God has sent his son to help His people.  Jesus came to earth showing indiscriminate love and compassion; he taught and healed, forgave sins, and permanently defeated death.  The best way I know to describe these realities is to say: “Everything always changes when Jesus gets involved”.
Showing Christ-like compassion is our theme this morning. For our life application I want us to think about these questions:  Who would Jesus pay attention to if he was here with you or me?   Where might he go and who might he spend time with if he lived in our neighborhood?  And what might his compassion lead him to do that would change our world?

Every day there are opportunities for us, ordinary moments, that can become extraordinary when compassion is present.  Do you believe that?  It’s so often a matter of staying alert to our surroundings and seeing what’s right before our eyes.  Here’s a true story that shows the importance of seeing. A middle-aged woman was on an errand one blustery winter day when she thought she saw something out of place in a pasture she often passed by. She pulled her car over and noticed a man who must have been thrown from his vehicle in an accident.  She quickly called for an ambulance, then ran to him.
In the precious few minutes she had with him, he was alert and mercifully pain-free. She covered him with her own warm coat and put his head gently on her lap.  She bent down to comfort him, and he asked her to pray for him.  Then he used his waning breaths to ask her to tell his family how much he loved each one of them.  She listened, held him, and offered words of comfort as he lay in the snow under a bleak winter sky.  He died peacefully, in the arms of a compassionate stranger.
The woman never imagined she’d find herself in such a difficult situation.  But even in her state of shock she thanked God for helping her see a man lying in the field under a dull winter sky.  She later learned what had happened to him: he’d been stricken with a seizure and lost control of his car, swerving off into a ditch.
Words can’t convey the heartbreak that came when a police officer drove to the man’s home, knocked on the front door, and informed the family of his death.  He also reported that a compassionate stranger had been with him in his last minutes, and he had felt no pain.  That news was such great comfort to his wife, three children and many others.  They were so thankful he wasn’t alone, that someone was tenderly listening and caring, just as they themselves would have done if they could have been there.  I know all of these details because I was this family’s pastor.  I spent time in their living room late into the night, with three small children snuggled around me on the couch.  They colored and watched cartoons on the TV as the grown-ups made phone calls, put on coffee, and went through the motions in a state of shock and sadness.
A few days later, at that dear man’s funeral, his life was well-celebrated, as was his assurance of heaven.  But the lasting impact on the larger community was this: we paid closer attention to our daily surroundings.  We realized we might be the stranger God could use to help others, but we had to be alert to see when and how we could be used.

A second way we can each show compassion is to listen to the people we encounter.  Jesus was still at a distance when he heard the sorrow in the loud, communal lament of the villagers in Nain.  He didn’t head away from that; instead, he chose to draw near to a large group of mourners.  Sometimes in the course of our week, we too can find we’re choosing to take a detour from our original plans. Say a close friend just got terrible news in a phone call.  In their distress they reach out to you, maybe to help them in some immediate and practical way.  Or they might need to say out loud what is so frightening for them.  Listening to someone when they’re in a state of crisis is an act of love.  When someone confides their most private thoughts and realities with us, we need to take great care and ask Jesus to use us to minister to them.
Listening is also a wonderful act of love in our everyday lives. I’m not talking about hearing the recap of someone’s day or discussing the weather forecast for the weekend. Those information-based conversations happen throughout our day.  What Jesus modeled for us was the importance of being fully present when people need someone to listen to their real inner needs and worries.  One day Jesus was at a well in the middle of the day in Samaria; his disciples had gone off to get lunch.  A woman showed up who was always shunned by others. Jesus showed genuine interest in her, asking her questions about her life.  He listened with patience and then asked some perceptive questions that gave her a chance to reveal her deepest hurts and needs.  That was a turning point for her.
What difference might it make if Christians, and others, devoted themselves to being radically other-centered, caring, and patient listeners?  Experts say we’re living through one of the most frightening and stressful times in decades.  People are feeling isolated, without hope or help, and despair is just under the surface, similar to the woman at the well.  Jesus gave her his undivided attention, listening carefully, then he asked perceptive, faith-focused questions.  The result was that she re-committed her life to God and began to come alive again.  Her joy spilled over as she told others about what Jesus had done for her.
Who do you know that’s feeling stress or isolation?  They may have even once been close to God.  Reach out to them, even if you haven’t been in touch for a while.  It is such an act of love to listen to others. You may be among those who help them heal just a bit, or head in a better direction.  You may give them a boost during a very tough week.  And chances are, if you ask them if they want you to pray for them, they’ll say yes, and be grateful.
I think every one of us knows how important it is to see others and listen to them; You who are part of this church regularly put your faith into action in these ways.  I think what Jesus shows us in today’s story is that it is compassion that should guide and propel us.  Do you know that compassion is one of the fruits, or by-products of the Holy Spirit? That means God continually fills us up, so we never lack genuine compassion; we’ll never burn out with giving fatigue.  Isn’t that such good, heartening news?  I love this promise of provision from God!
Just one thing remains.  Showing compassion, being Jesus’ servants in this wounded world, means we need time. I raised the idea of a Lenten discipline earlier in the service, unplugging our electronic devices to free up more time in our everyday lives.  Is that challenge a fitting one for you?  Would it reset your priorities, make relationships stronger, help your body be healthier, give you time to help others and care for your own needs?   Would your relationship with God also be refreshed?
We all know that if we keep doing the things we’ve always done, we’ll keep getting the same results.  If you’re fantastically content with your life as is, carry on.  But if God’s giving you ideas and you want more satisfaction in your life or future, do what’s hard, and trust that God will help you.  And come Easter morning, when Jesus is declared alive, you might realize you feel the same way!  May the old go in each of us and new life come! Amen.